This is an extended version of an interview also appearing on The Swanky Seventeens Debut Club. 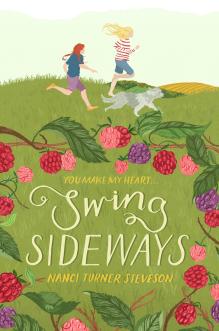 SWING SIDEWAYS is a heartfelt middle grade debut in the tradition of BRIDGE TO TERABITHIA. Annie spends a magical summer exploring in the countryside with her new friend, California, in search of two missing ponies. But, when Annie discovers the truth behind California’s secrets, everything she’s learned about bravery, forgiveness, loss and love will be put to the test.

END_OF_DOCUMENT_TOKEN_TO_BE_REPLACED

Never lose your ability to see the extraordinary. That should be the tagline for A.F. Harrold‘s middle grade novel, The Imaginary (illustrated by the fabulous Emily Gravett).

Harrold tells the story of Rudger and Amanda. Amanda is a real girl with a powerful imagination. She dreams up an imaginary Friend named Rudger, and together they go on incredible adventures. True, Amanda bosses him around and sometimes hurts his feelings, but Rudger will always be her Friend, until… END_OF_DOCUMENT_TOKEN_TO_BE_REPLACED